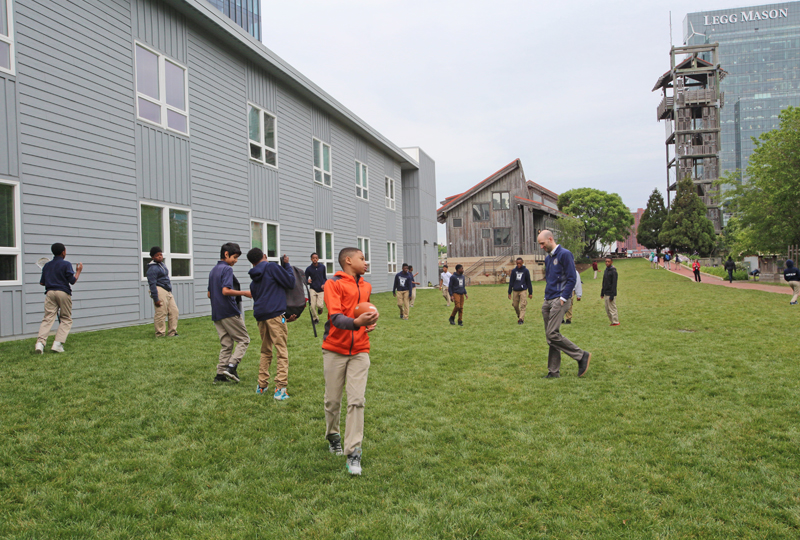 Baltimore, May 16, 2016 – Living Classrooms Foundation has completed construction of a brand new state-of-the-art building, which houses The Crossroads School, the city’s top-rated middle school, on its East Harbor Campus at 802 S. Caroline Street. The new building was made possible through support from the community including an $800,000 gift from the Edward St. John Foundation. Prior to construction, the school had been operating out of temporary trailers for years with the promise of an eventual move to a more permanent home. Now bearing the name Edward St. John Learning and Teaching Center, the 12-classroom building will be home to 162 students who will benefit from increased technology, such as smart boards, as the school celebrates its 13th year of operation.

“We are proud to support the great work of the Living Classrooms’ Crossroads School,” said Edward St. John, Chairman and Founder of St. John Properties. “I firmly believe that education has the power to transform lives and strengthen communities! It provides the foundation for success. Through this new middle school building, the students will now have the advanced learning and teaching space that they deserve.”

In its thirteen years, Crossroads has maintained its status as one of the top public middle schools in the city, its students receiving some of the highest metrics in the state. In 2002, when Crossroads opened its doors, it welcomed students from some of the most disadvantaged neighborhoods on the east side of Baltimore, many of them falling far below grade level in reading and math. Now deemed a Strand I school, Crossroads students outperformed every district average on the PARCC test in 2015 and boasts the highest 8th grade math scores in Baltimore city. 100% of its graduates are accepted into either public or private college preparatory high schools. What makes Crossroads special is not its ability to pass tests but rather its core values of leadership and citizenship, requiring students to be active both within the school and in their communities–preparing them for high school, college, and career.

“I would not be the student or person I am, had I not attended The Crossroads School,” said Najee Rollins, Crossroads Alumnus and recent Denison University graduate. “Coming from a rough neighborhood in Baltimore City, I appreciate the attention I received from Crossroads’ teachers who nurtured me as a student and prepared me for the rigor I have faced academically since then,” he said.

“We are so grateful that Crossroads students have a wonderful new school building where they can learn and grow,” said James Bond. “We cannot thank the Edward St. John Foundation and our generous contributors enough for helping us to make this state-of-the-art building a reality- a building worthy of being home to one of the city’s top public middle schools.”
The transition from the school’s temporary satellite location on East Fayette Street, back to its East Harbor home was a multi-day process that took hundreds of volunteers and a lot of manual labor to accomplish. Students, individuals, and corporate volunteers assisted with moving truckloads of furniture and supplies from the Fayette location into the new building. The following groups played an integral part in the successful move: Howard University, Constellation Energy, Freestate Challenge Academy, Amerigroup, Agora, Brown Advisory, Next One Up, Morgan State University, Playworks, and Warby Parker.

While the students and staff settle into their new home business continues as usual, as students wrap up PARCC testing and begin to prepare for their upcoming “Presentations of Learning.” On May 26, 2016 Crossroads students will showcase the work they have been completing all year to a panel of educators and volunteers who will ask students to defend and explain the context of the lessons and their importance.

About The Crossroads School: The Crossroads School is a public, tuition-free, charter middle school operated by Living Classrooms Foundation on its East Harbor Campus through a contract with the Baltimore City Public School System. The school, which opened its doors in September 2002, draws students from throughout Baltimore city and currently serves 162 students in 6th through 8th grades. Many of these students come from poverty stricken neighborhoods, where each of the surrounding middle schools is on the “reconstitution eligible” list for schools that are in danger of being reorganized by the Maryland State Department of Education. Of our current student population, more than 80% are Title I students, and are therefore eligible for free or reduced lunches.

The Crossroads School prides itself on being a “school of choice” whereby students, families, and teachers choose to be a part of the Crossroads educational community. The curriculum focuses on the fundamentals of reading, writing, and math with a hands-on, interdisciplinary approach. Technology, cooperative learning, critical thinking, and real-world application of knowledge are also considered to be fundamental to the core curriculum. Students are held to high standards of character called the “Five Promises” (Honor and Integrity, Contribution, Commitment to Quality, No Excuses, and Perseverance), a tool used to inform behavior both inside and outside of the classroom. With continued community support, this effective school can continue to benefit the lives of our students and provide a meaningful, enriching alternative to low-performing area schools.