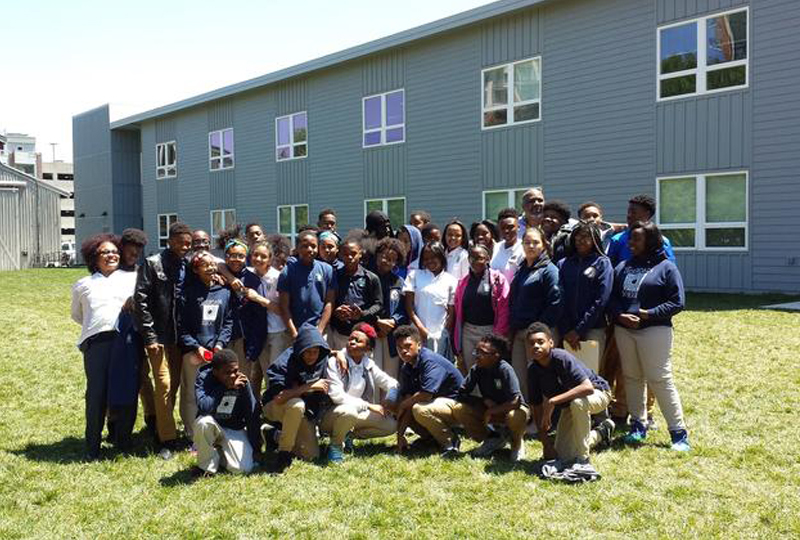 A top-rated charter school is celebrating its move from temporary trailers to a new state-of-the-art building in Harbor East.

The Living Classrooms Foundation announced the completion of its new campus, which will house The Crossroads School, on South Caroline Street near Harbor East. The building, made possible by a $800,000 gift from the Edward St. John Foundation will be named after the donor.

The 12-classroom building will house 162 middle schoolers from East Baltimore, who will have access to more technology and other amenities, according to a release from the Foundation.

The Edward St. John Learning and Teaching Center will join several other institutions on the campus bearing the name of powerful Marylanders. Also there is the Mikulski Center, which houses the school’s special education program and a Weinberg Center which is used for student lunch and houses Living Classrooms’ educational staff.

The school opened in 2002 and has reached academic excellence in its 13-year-history. It’s population was made up primarily of under-performing students, who now outperform the district average on the new, more rigorous PARCC exam and posts the highest eighth grade math scores in the city, according to a release from the organization.

Additionally, 100 percent of the school’s graduates are accepted into either public or private college preparatory high schools.

“What makes Crossroads special is not its ability to pass tests but rather its core values of leadership and citizenship, requiring students to be active both within the school and in their communities–preparing them for high school, college, and career,” the release said.