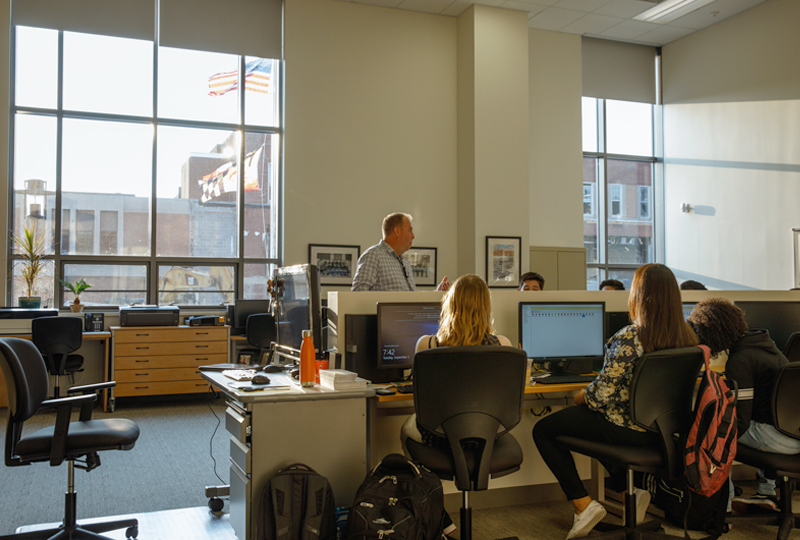 While this was in process, talks already were underway at Towson University to determine how to reinvent the traditional public high school in Maryland. The effort, led by Nancy Grasmick, Ph.D., Towson University’s Presidential Scholar and former Maryland state school superintendent, would hone in on Frederick High School, which had innovative plans of its own in place for its new school that was slated for construction and a fall 2017 opening. The school, to be located in the center of Frederick, would serve a diverse population including Hispanic, African-American and white students, many of who lived at or near poverty level.

The partnership launched at the ideal time, according to Grasmick, who cited support from Superintendent Theresa Alban, Ph.D., and the leadership of former Maryland and National Teacher of the Year Michelle Shearer, who transferred from Urbana High School in 2013 to serve as program manager for high school innovation and transformation for Frederick County Public Schools and serve as lead manager for LYNX.

The Frederick project, Linking Youth to New Experiences (LYNX) at Frederick High, was one of 25,000 to apply for a grant from Jobs, but was not in the 10 selected for funding. Instead, the contingent approached the General Assembly with the help of current Baltimore Mayor Catherine Pugh to change what they call the “lock step” method of schooling that requires all students to meet graduation requirements in the same manner. The legislation passed 187-1 to provide $236,599 in funding to LYNX to supplement the budget allocated from the school system. Leaders are continuously looking for additional funding sources through grants and community resources, Shearer says.

Local companies St. John Properties and Whiting Turner have stepped up to financially support the innovative effort as well. The Edward St. John Foundation, for instance, operates under a mission focused on support of formal educational programs related to schools, based on St. John’s philosophy that “education builds strong lives and strong communities.”

Other companies have signed on to host internships, field trips, video conferences and other experiences for students. One such company is AstraZeneca, whose Frederick facility produces life-changing medicines for the treatment of cancer, and respiratory and autoimmune conditions.

“The company’s biologics manufacturing center is participating in the LYNX program because it’s an innovative way to show students the exciting possibilities of pursuing a career in science, technology, engineering and math (STEM) related fields,” says Stephen Hill, vice president and general manager of the Frederick operation. “Through the LYNX program, we look forward to hosting the students for site visits and showing them the different career opportunities (that exist). Our goal is to hire locally, and we believe LYNX and all of the local STEM programs are important in our community as we develop the workforce of the future,” Hill says.

The unique school design calls for individualized student plans that maximize student choice and flexibility in meeting academic and career goals. Every student designs a Student Success Plan, that combines input from parents/guardians, business and community partners, and advocates. The plan incorporates a variety of educational methods based on individual student needs and contains internship experiences, community college coursework and other ways to earn credits and meet graduation requirements. Student athletes, for example, may earn physical education credit for participation on interscholastic teams and passing online examinations demonstrating knowledge of nutrition, says Leslie Wilson, assistant to the Presidential Scholar at Towson University.

In addition, students achieving at high levels can be co-enrolled in community college courses and earn an associate’s degree and a high school diploma at the same time, Grasmick notes.

Adaptations also are in place regarding testing. Instead of standardized testing requiring students to recite facts, they are permitted to choose other ways to demonstrate they have mastered competencies. Students who desire to continue with traditional methods may do so, Shearer says.

“It’s about the application of skills rather than pushing paper and pencil,” Wilson says.

“We want the high school educational experience to be meaningful,” Shearer says. “We don’t want them to finish high school and feel like all they did was check a bunch of boxes.”

The program begins before a student ever sets foot in the school building. While in eighth grade at the feeder middle schools, students pen personal stories about themselves, and share information on 25 areas including hobbies, interests, future plans, likes and dislikes. Once they reach ninth grade, they are assigned one of four personal LYNX advocates to help develop a “roadmap” for their high school experience. The advocates are teachers who spend part of their day advocating for students, helping to develop their success plans, arrange internships and coordinate other aspects of their schooling. It’s all done using digital documentation in their native languages with shared access for constant adjustment.

“We want students to have a voice in making sense of their own educational path,” Shearer explains. “It’s too late to start this conversation in their senior year. That’s why we’re staring in eighth grade.”

Currently, a team of 20 teachers works directly with freshmen through the LYNX program. Ultimately, all faculty will be involved as the school transitions fully to the program. All teachers undergo professional learning throughout the year in preparation for their roles with LYNX.

“People are hungry for our high schools to prepare students for the next step,” Grasmick explains. “It’s one of the things that plagues the American educational system.”

The school day also is flexible, based on student need. Students who help get siblings off to school can go in late, and others who work in the afternoon at jobs or internships arrive early. Those who wish to take extra courses can attend for an extended day.

Freshman Christopher Célariè, one of approximately 300 in the class of 2021 taking advantage of the program, has enrolled for a fifth class during the second semester.

“I know that I am taking a big leap by giving myself a bigger workload, but in the long run it is an amazing idea for me to do because it lets me obtain two additional credits a year, which gives me the chance to either graduate early and start my life early or, like I planned initially, take AP or college level classes to get college credits,” says Célariè, who aims for a career in medicine. “It would give me a huge head start in my college career because it would aid in how soon I graduate from college.”

Célariè is one of many freshmen who will take advantage of other offerings at LYNX – a dinner meal for those who stay late, an after-school learning lab and regular sessions with his assigned advocate.

“I would like for my LYNX advocate to be there when I need them for some guidance when it comes to my career plans and for them to help me find and meet people that can properly inform me upon some of the nuances on the careers or what classes they recommend I take if I choose to pursue whatever career the guest has,” he explains. “Knowing that I have that assistance at my disposal alongside guidance counselors is comforting since I won’t have to take on some important life decisions alone.”

The program will serve as a pilot, in the hopes that it can be expanded first through Frederick County Public Schools, then elsewhere in the state of Maryland, including Baltimore City, and ultimately nationally.

“Our funding helped to support the work that went into creating this model school was important,” says Edward St. John, a long-standing supporter of education. “LYNX will truly be transformational for the faculty and students and will serve as a model for education now and in the future. We are honored to have been a part of this exciting journey!”

St. John credits Grasmick’s credibility and notoriety as she holds the distinction of being the longest serving appointed state superintendent of schools in the United States. Grasmick’s tremendous vision to establish a new and innovative standard of teaching that accelerates interactive learning will impact the education of students today and for years to come, St. John adds.

The program is generating buzz outside of the local community as well. “The Daily Record” has named “Team Grasmick – The LYNX School” an innovator of the year. The team will be honored at a reception in Baltimore in October.

“Everyone feels our current structure is not adequate,” says Grasmick. “It’s 100 years old. The world is very different. We haven’t had a deep relationship with the business community. Some tech schools do, but it’s not as robust as it needs to be.”