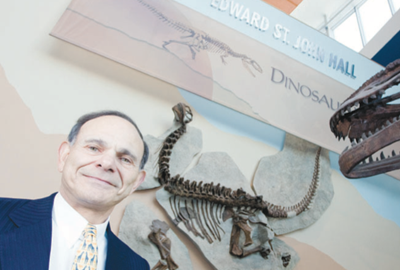 ED ST. JOHN
President, St. John Properties
Age: 70
Power is … “I would define it as a person who is successful in his financial endeavors and is recognized by others as being successful and uses that suc- cess to help others.”

Ed St. John and his wife didn’t give out any gifts this year — to neither friends nor family.

Sure, the economy has been tough on commercial real estate, and the president of St. John Properties isn’t immune from it. But that’s not the reason.

The St. Johns’ decision was philanthropi- cally motivated. Instead of buying trinkets and gadgets for their loved ones, the St. Johns estimated the value of the gifts they would have given and donated that money to Southwest Emergency Services, a volun- teer organization helping the homeless and working poor.

It’s a spirit of giving that the Baltimore developer traces back to his upbringing, and one that drives St. John Properties to donate 7.5 percent of its income to needy educational programs across the region. The company made between $10 million and $15 million last year.

“I guess I was taught by my family and by my early religious education — I went to Catholic schools — it’s just part of that Judeo-Christian training that you help out people,” St. John said. “I feel that every- one should give to what makes them feel comfortable.”

The aim of St. John’s foundation is to donate to education programs supporting children from financially disadvantaged backgrounds. The need is more pressing due to the economy, St. John said, and he and his foundation are both being asked to give more.

In 2007, St. John also donated 15 percent of St. John Properties’ income — or twice what it normally gives — to worthy causes. The result, St. John quipped: He is no longer a member of the foundation’s board.