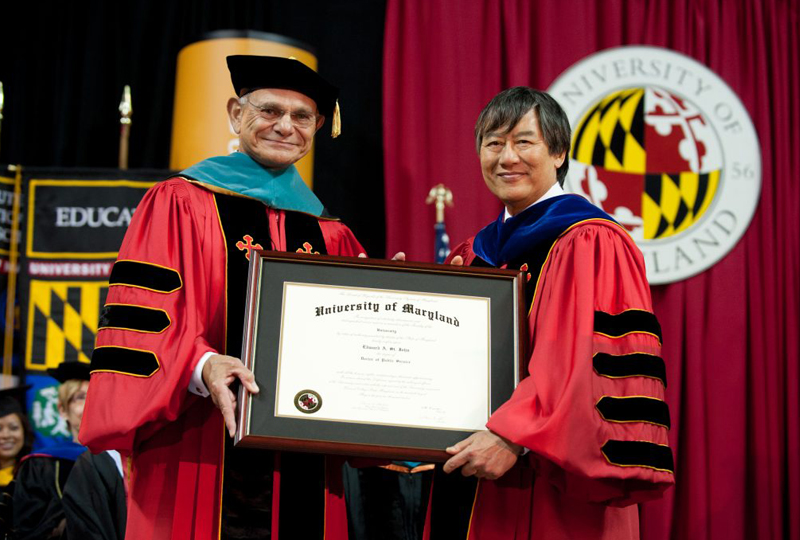 BALTIMORE, MD (June 8, 2012) — Edward St. John, Chairman and Founder of St. John Properties, Inc., a Baltimore-based commercial real estate development company, was awarded an Honorary Doctor of Public Service by the University of Maryland at College Park during the school’s  May 20 commencement ceremony.  St. John earned his Bachelor of Science degree in Electrical Engineering from the University in 1961.

“St. John’s business successes are only a small part of the incredibly productive life and career of this highly accomplished Terp,” stated Dr. Wallace Loh, President of the University of Maryland.  “We have honored him with an Honorary Doctor of Public Service because of his contributions to the State of Maryland and his impact on the lives of so many people.”

The process for selecting honorary degree recipients is extremely rigorous.  A committee of senior faculty at the University recommends candidates to the Board of Regents of the University System of Maryland.  These candidates are considered by the Board’s Education Policy Committee and finally are reviewed by the full Board.

Long recognized for his outstanding accomplishments, St. John has received many honors and awards.  It is what he does with this success that makes St. John exceptional, noted Corridor Inc. magazine upon naming him its 2009 “Person of the Year,” a special accolade because it was generated from his peers.   He has been named “Maryland Entrepreneur of the Year,” has been given lifetime achievement awards from numerous group and has also earned admission to Halls of Fame in Anne Arundel and Baltimore counties.

The Baltimore native has contributed and pledged more than $43 million to support local non-profit organizations and educational institutions. Approximately 7.5 percent of the company’s annual net income is donated to charitable causes through the Edward St. John Foundation.  With his philosophy that “education has the power to transform lives and strengthen communities,” education has been the most important focus of Ed. St. John’s benevolent efforts.

St. John’s interest and involvement in education are more than just financial.  He has served on the boards of educational institutions, including the Maryland Academy of Sciences/Maryland Science Center, University of Maryland Baltimore County, Alex Brown Center for Entrepreneurship, The Johns Hopkins University Real Estate Institute and others.

“St. John’s remarkable career is an example of how to productively combine effective managerial, operational and financial experience with exceptional ingenuity,” said Dr. Loh. “He brings to philanthropy the same commitment that helped him build one of the region’s most successful commercial real estate firms. He has impacted the state, economically through his successful company, as a leader through his public service and philanthropically through his generosity.”