Does Redesigning Classrooms Make a Difference to Students? 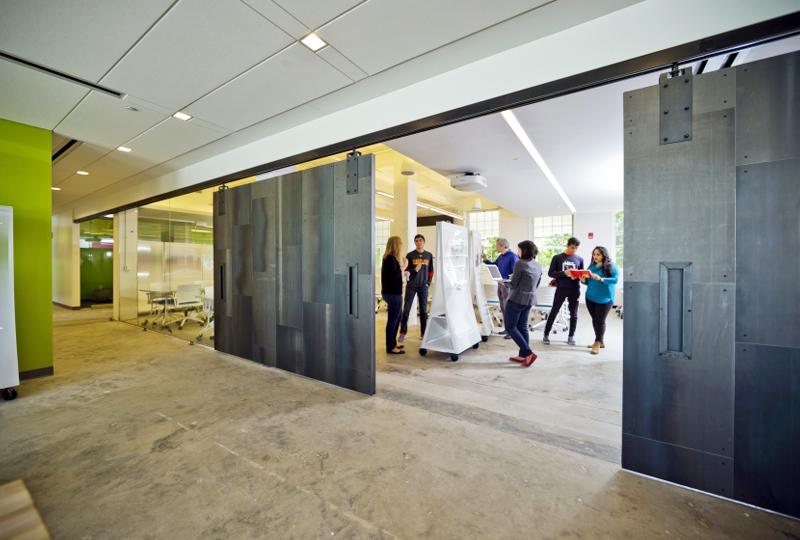 When Melissa Hayes-Gehrke set foot in a new active-learning classroom here at the University of Maryland, she says it felt like “coming home.”

Ms. Hayes-Gehrke, a principal lecturer in astronomy on this flagship campus, had begun incorporating active learning into her lectures years ago, asking students to conduct group work and watch instructional videos before coming to class.

But she’d taught in a traditional classroom, with rows of seats jammed together and bolted to the floor. They all faced a podium at one end of the room.

“It was always really frustrating because the students could not discuss with each other very well,” she says. “They’d all have to somehow twist around, stand, or try to sit four or five in a row and talk to each other.”

So when Ms. Hayes-Gehrke saw a newly designed classroom with round tables and large projection screens on all four walls, she remembers thinking: “Finally, they made a classroom that’s exactly what I want.”

The classroom is one of 10 prototypes on the College Park campus that were created to encourage student-centered teaching and collaboration. Eleven more rooms will open for classes this summer, all in a new, $120-million center geared for teaching, learning, and innovation.

Called the Edward St. John Learning and Teaching Center, it houses a variety of spaces: small rooms with round tables, like the one Ms. Hayes-Gehrke taught in, and theater-like halls with rows of swivel chairs. Glass whiteboards and screens are everywhere.

Spaces specially designed to foster learning are cropping up on campuses across the country. North Carolina State University and the Massachusetts Institute of Technology were early pioneers. More recently the University of Iowa, Indiana University, and many others have created new classroom spaces and developed pedagogical training for the instructors who teach there.

A report from Educause declared that active-learning classrooms like Maryland’s are the top strategic technology of the year, and forecast that such facilities would be commonplace within the next half-decade. And yet the research on how design affects learning is somewhat sparse.

Students in those classrooms generally show qualitative and quantitative improvements in how engaged they are in class, and in how much information they retain. But is that because of the space? Or is it because instructors who teach there change their teaching style? In short, is changing classroom design worth the investment?

Space Is Not Neutral

The answer, according to many researchers, is yes. But the reason why may be surprising.

D. Christopher Brooks is interim director of research for Educause, an organization that supports technology on campuses, and was previously a research associate in the office of information technology at the University of Minnesota-Twin Cities. There, he was a co-author of papers that isolated the impact of space on learning, by looking at active-learning and traditional classrooms on the Minnesota campus.

For one study, researchers there compared sections of a biology course. One met in an active-learning space, and the other met in a traditional classroom. The sections were taught by the same instructor, who had intended to keep his course materials, activities, and delivery consistent across the sections.

The research found that the space affected the behavior of both students and the instructor. The professor surprised everyone, including himself, by being unable to keep his teaching style consistent. When he moved from a traditional room to one with round tables, he lectured less and walked among the tables more. Space, in other words, was not neutral.

Christina Petersen, an education-program specialist at the Minnesota institution, says instructors will sometimes wander around active-learning classrooms because there’s no designated place to stand. That practice is actually beneficial, as faculty members can listen as students work through course content. If they’re struggling, instructors can jump into the conversation, or make a note of topics to review in more depth as a class.

An active-learning layout can also break down the social hierarchy of instructors looming above, or at a distance from, students. When Ms. Petersen began teaching in such a classroom, she found that students more quickly became comfortable questioning her and responding in class. Because students were sitting at tables facing one another, conversation flowed more easily.

A second finding of the Minnesota study addressed the question of cost. Some students there reported being less enamored of active-learning classrooms, describing them as excessive and a waste of scarce resources. (The negative impressions disappeared in later studies, the researchers said.)

For institutions with thin budgets, the criticisms can be valid: Is equipping a room with fancy tech and gadgets the most cost-effective way to improve learning?

Building such classrooms can be too expensive, Mr. Brooks says. But colleges are in the business of educating people, he adds, and evidence suggests the rooms help.

An argument in favor of the new spaces is that their net cost may not be so steep after all. For one, the upfront cost to construct the rooms may be offset by increasing retention among students, and easing bottlenecks in courses with high dropout and failure rates. That rationale is why San Diego State University, for example, concentrates on such courses when changing classroom design or pedagogy.

But for institutions that can’t justify a hefty upfront payment, researchers suggest there’s a thrifty way to reap similar gains. That’s because the feature of the rooms that seems to have the greatest impact on learning is not the expensive flat-screen monitors or other showy technology. It is the humble circular table.

Round tables force students to engage with one another, says Alejandro Barrera, a student at College Park who took Ms. Hayes-Gehrke’s course this past spring. It’s hard for students to not pay attention. Being able to easily break into discussion groups was the greatest benefit of the room, adds Melanie Rowland, a rising junior. Advocates of group work sometimes say students try harder when they know their peers, not just the instructor, will see their work.

Researchers at Bethel University, in St. Paul, also compared students’ learning gains in high- and low-tech active-learning classrooms, and found there was no marked difference.

College Park, which uses round tables in many classrooms, has found a way to make large lecture halls more conducive to those kinds of peer discussions as well. The theater-style seating in those lecture halls is structured so that there are two rows of students for every tier. During lectures, instructors can ask students to talk or work in groups, and they can swivel their chairs around to speak with their peers in front of or behind them.

“That’s something I wish I’d had in my classrooms several years ago,” Ms. Hayes-Gehrke says. The mobility lets students move more easily from listening to a lecture to discussing a topic in groups. “I can see that if you’re looking to change from a more traditional lecture style into more group work,” she adds, “these classrooms would make it easier.”

A Room for Each Teaching Style

Of course there are drawbacks to active-learning classrooms — among them, the chaos and cacophony that often accompany group work. Students and instructors must also get used to sometimes having their backs to one another. And introverted students and non-native English speakers may initially find small group discussions intimidating, Ms. Petersen says. Those problems are common when instructors use active-learning techniques, regardless of how the desks are set up.

Champions of learning spaces like these, however, don’t argue for them to replace all classrooms. Rather, they say, different rooms should cater to different teaching styles and class sizes.

Eventually, Mr. Brooks says, institutions should offer a range of spaces that meet the needs of different instructors, students, and disciplines. “We don’t hold wet labs in lecture halls; we have lab space,” he says. “And the same thing here.” Instructors who do not plan to use active-learning techniques in class, he adds, need a place to teach, too.

Space is a tool that can encourage instructors to change their pedagogy, but the two aren’t the same. Active learning can still happen in lecture halls; and determined instructors can lecture while students sit at round tables.

Ultimately, Mr. Brooks says, space exerts an effect on students and faculty members. But, he adds, being in a redesigned classroom is “not like putting on a special hat, and all of a sudden you’re smarter.”