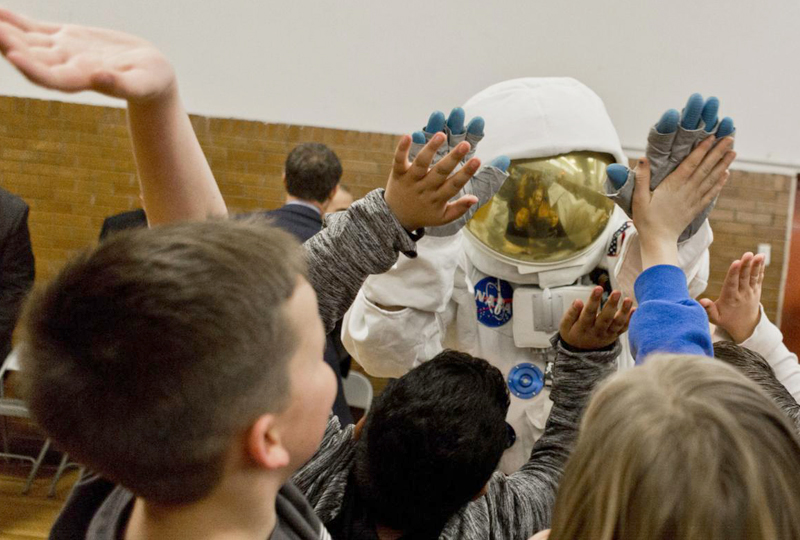 The $1 displayed on the cutout of the spaceship wasn’t impressing the students of Central Elementary School in Pleasant Grove. Neither was the $10 revealed when another cover was pulled to show the next number in the donation. And then the next zero was uncovered, and the next, and the next, until the spaceship revealed the final $1 million and students launched into eruptive yelling in celebration.

The $1 million commitment from the Edward St. John Foundation toward the rebuild of the Christa McAuliffe Space Center at Central Elementary School is the first major gift and boost toward the $4 million the Alpine School District hopes to raise for the project.

The $1 million commitment is part of a four-year pledge from the foundation to match dollar-for-dollar funds raised by the Alpine School District.

The hope is for the seven-digit commitment to help spur others toward donating to the project.

“It helps people know this is something they can contribute to and it’s happening,” said James Porter, the director of the space center.

The donation was revealed during an assembly at the school Monday afternoon that featured a man in a space suit, renderings of the new facility and U.S. Rep. John Curtis, R-Provo, sharing the importance of science and his memory of being a 9-year-old watching Neil Armstrong walk on the moon from his grandfather’s television.

The Edward St. John Foundation, located out of Baltimore, got connected with the Alpine School District because its parent company, St. John Properties, owns property in Utah County.

He said the foundation is supportive of the space center’s mission and model.

“You walk into the room and you say this is the classroom you dreamed of as an elementary kid,” Thomas said.

The foundation had previously given a $5,000 donation to Pleasant Grove High School athletics.

Hundreds of thousands of people have gone through the school’s space center, which simulates space missions to test various skills. A rebuilt center will include a planetarium dome and will increase both the center’s capacity.

It will also expand its material to appeal to more age groups.

“This lets us inspire kids at a younger age,” Porter said.

The center has increased its fundraising goal from $800,000 to $4 million. Porter said the increase will add both capacity and quality to the center and will allow the most current information to be available to patrons.

Finding out about the donation, Porter said, was seeing a dream fulfilled.

Any funds raised over the $4 million mark will go into an endowment for the space center, according to Tim Eisenhart, the executive director of the Alpine School District Foundation.

Eisenhart made a call for action for others to donate and said that the center’s patrons come from across Utah.

“It impacts the state,” Eisenhart said.