Building a Commitment to Learning and Teaching 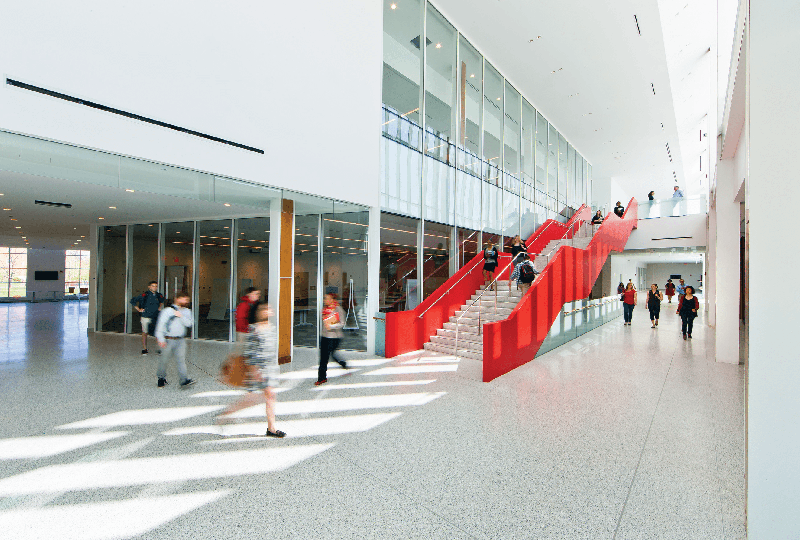 When Edward St. John enrolled at the University of Maryland 60 years ago this fall, he remembers classes following a formula: A professor lectured to a room of hundreds of students. Those students listened. The end.

Faculty or students using the campus’s newest building will enjoy a much different experience.

University officials say the Edward St. John Learning and Teaching Center, which officially opens May 11 and is named for the 1961 alumnus and real estate developer and philanthropist who gave a $10 million leadership gift for the project, will serve as a national model of collaborative learning.

“It’s exciting that the vision for a space that will transform the classroom experience and shape the way faculty teach has come to fruition,” says St. John. “This center will create a new and innovative standard of teaching that accelerates interactive learning and will impact the education of more than 12,000 UMD students each day for years to come.”

A Baltimore native, St. John came to Maryland initially as a path to become a test pilot for the Air Force. He showed up at the Armory to register for his fall classes as a freshman, asked the Air Force ROTC representative the most popular major for cadets who became test pilots, and just like that, an electrical engineering student was born. With that same direct outlook, he learned that he needed a 2.0 GPA to graduate, and left four years later with a 2.01 and a diploma.

St. John’s father, meanwhile, had owned three modest companies, in manufacturing and distribution of building materials, and he had built five small buildings in the Pimlico neighborhood. He died when St. John was only 16, and St. John was still a Maryland student when his mother took him aside: “She said, ‘If you don’t stop this flying foolishness, I’m going to sell the family businesses.’”

He and two fraternity brothers from Delta Tau Delta took the natural next step: They went to the old dive bar at Town Hall on Baltimore Avenue, and over a six pack decided that flying airplanes was overrated and that he should take over his father’s businesses. First, though, he shed two of them: “I hated manufacturing and I despised distribution and I loved the real estate end.”

Since then, he’s grown St. John Properties from 50,000 to more than 18 million square feet of office, flex/research and development, retail and warehouse space in Maryland and seven other states.

In 1998, he also started the charitable Edward St. John Foundation, which focuses on educational funding primarily related to schools. More than $60 million has been contributed and pledged through donations by the foundation, St. John and his company to over 850 educational and other nonprofit organizations.

While he was building up his real estate firm, St. John sent two of his three children (Kellay ’88 and Edward “Trey” ’89) to Maryland, but he hadn’t much of a connection to the campus until he met newly hired university President Wallace Loh in 2010.

Loh, he remembers, spoke of his interest in a constructing a forward-looking new classroom building that would be part of his efforts to elevate the entire institution. St. John openly says he was captivated by the new leader’s vision.

“He had a dream of the new University of Maryland and I wanted to be part of that dream,” St. John says.

The ceremonial groundbreaking was held less than a year later. The first building to rise on McKeldin Mall in 50 years, it incorporates Holzapfel Hall and houses the Teaching and Learning Transformation Center (TLTC), the Academy for Innovation and Entrepreneurship and the Division of Information Technology’s Academic Technology and Innovation team.

While St. John was firm that the exterior architecture should match the traditional style and red brick of other structures on the Mall, the inside is modern, light and airy, and the TERP Classrooms throughout the center are outfitted with state-of-the-art technology and highly configurable furniture.

“It’s going to enable the transformation of student learning in a fundamental way,” says Ben Bederson, associate provost of learning initiatives and the TLTC’s executive director.

Sharon Akers ’78, vice president of corporate relations for St. John Properties, executive director of the Edward St. John Foundation and a trustee on the University of Maryland College Park Foundation, says she’s inspired to see the innovations in teaching and learning since the time she and her brother went to school here.

“With our foundation and with Ed’s emphasis on supporting education and the feeling that education builds strong lives and strong communities,” she says, “having a facility like this center with his name on it is a wonderful legacy.”