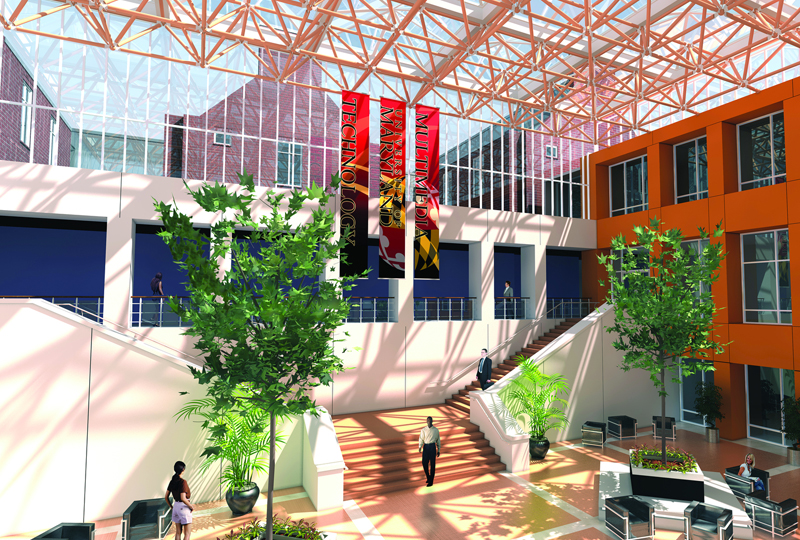 Baltimore developer Edward St. John has donated $10 million to the University of Maryland, College Park to help his alma mater build a new high-tech classroom building in the heart of campus.

The proposed Edward St. John Teaching and Learning Center would offer 2,000 classroom seats and be used daily by one-third of the campus’ undergraduates. It would address a serious shortage of modern classroom space on the state’s flagship campus, said President Wallace D. Loh.

“Instruction as we’ve known it for the last 20 or 30 years will be different with this building,” Loh said. “It’s going to be technology-rich, it’s going to be interactive, and students will learn in teams.”

Loh said the new space is especially important given projected enrollment growth at College Park over the next decade, as the state tries to increase its percentage of citizens completing college degrees.

For construction on the $63 million building to move forward, the General Assembly would have to approve almost $48 million in funding in the 2013 state budget. Gov. Martin O’Malley included the center in his projected budget. It is unclear when the building might open.

The governor praised St. John for his gift.

“The impact of his leadership and vision will span decades and directly affect the day-to-day learning experiences of Maryland students,” O’Malley said in a statement. “In difficult economic times, innovative approaches that bring the public and private sectors together enable the State to build on its strengths.”

St. John, a 1961 graduate of the university, said he wants others to benefit from the kind of educational experience he had in College Park. He founded St. John Properties, one of the state’s largest commercial development companies, in 1971.

“I strongly believe that education has the power to transform lives and strengthen communities, and know that this center will benefit University of Maryland students for decades to come,” St. John said in a statement.

Sharon Akers, executive director of the Edward St. John Foundation, said the developer was traveling out of the country on Wednesday. “He feels education is so important,” she said. “To combine that with the building component of his life and his alma mater, this is a gift that is tremendously special for him.”

The proposed 47,900-square-foot building would largely replace Holzapel Hall along the campus’ central McKeldin Mall, though the facade of Holzapel would remain to maintain design consistency. The space would feature large lecture halls and smaller classrooms with students seated in teams, linked to professors by ubiquitous computer screens. It would be used most heavily by freshmen and sophomores.

“The way teaching is evolving is very different than the way classrooms were designed 50 years ago,” Loh said. “This is truly group learning, and when you talk to students, they say it’s so much better for them.”