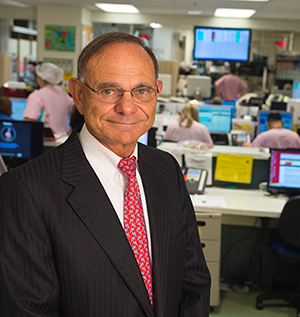 “Put others first,” this motto has long served as a driving force behind visionary business leader and philanthropist Edward St. John. It has continued to inspire him throughout every phase of his remarkable career—from founding one of the country’s top real estate firms valued at over $2 billion, to building a charitable foundation that has donated more than $58 million to charitable causes, to helping the R Adams Cowley Shock Trauma Center at UMMC achieve its strategic vision as both a donor and board member.

Mr. St. John’s first orientation to Shock Trauma was when he attended the Shock Trauma Gala in 2012. “The program started with the recounting of the real life story of a young man whose car had crashed through my farm fence several years before. During the accident, he had been impaled with a board through his chest. There he was, standing on stage; and we were hearing his story. His life had been saved by the Shock Trauma Center! Later, I was asked to serve on the Shock Trauma Board of Visitors. I felt it would be an honor to be affiliated with the #1 Shock Trauma center in the world,” Mr. St. John remembers. He has since approached his board position with the same selfless spirit he has shown in all aspects of his life.

As a young man, born and raised in Baltimore, Mr. St. John had aspirations of becoming a military test pilot. “I enrolled at the University of Maryland College Park, went to the Air Force ROTC desk and asked what degree I would need to be a test pilot in the Air Force. I was told electrical engineering, which was the degree I signed up for.” However, dreams change. “My father was an entrepreneur who had created three very small businesses; manufacturing, distribution and commercial real estate. He passed away when I was 16. As I was about to graduate from Maryland, my mother told me that I needed to give up the ‘flying foolishness’ and run the family businesses or they would be sold. The business I liked most was working with the real estate tenants,” he recalls. “The rest is history.”

That extraordinary history includes his establishment of St. John Properties in 1971, a commercial real estate firm headquartered in Maryland. The company now owns and manages over 17 million square feet of space and services more than 2,000 tenants in eight states. That history also comprises his creation of the Edward St. John Foundation in 1998, which receives 7.5% of St. John Properties’ annual net income and distributes 100% of those funds each year. The Foundation was established to formalize and focus the impact of his giving. The mission is “to provide funding for formal education programs from Pre-K through the high school level” based on Mr. St. John’s belief that education has the power to transform lives and strengthen communities.

Mr. St. John is quick to note that his philanthropy is altruistic in nature. “I learned years ago that if you feel an organization needs help, help them because it’s the ‘right’ thing to do not because of the notoriety you could receive,” he says. “The satisfaction you receive from helping others is enough.”

While Mr. St. John has received a great deal of satisfaction from assisting the Shock Trauma Center board, he wanted to offer philanthropic help as well. “I felt it was important to provide the financial support necessary for [Shock Trauma Center Director] Dr. Tom Scalea and his team to do their miraculous work,” he remarks. “We all have the power to make a difference,” says Mr. St. John.

“We have the choice to make it personal and to serve as a role model. It’s the most important thing we do in our lives.”