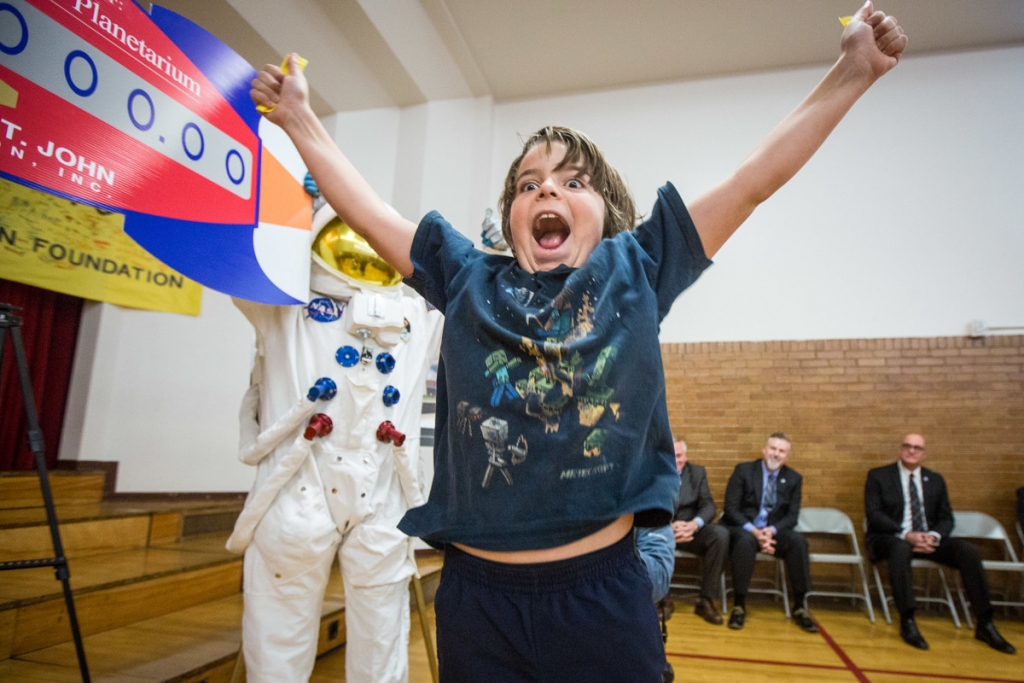 PLEASANT GROVE — A captain and her team confront totalitarian leaders and weigh whether to grant asylum to interstellar refugees as they work to repair their spaceship.

Then they go outside for recess.

The simulation based in a Pleasant Grove elementary school draws on more than just astronomy. At the Christa McAuliffe Space Center, in four rooms converted into spacecrafts, students face social issues, learn teamwork and grapple with the notion that their mission, however noble, may fail.

“They get to see how they are a part of the whole, and I think that’s a really valuable educational tool,” said James Porter, the center’s director.

As Alpine School District prepares to rebuild Central Elementary, the center also is poised to enter a new era, with plans for a new planetarium, two more simulators, and equipment that will bring the most recent footage from outer space right before students’ eyes.

On Monday, about 300 Central students cheered, clapped and howled at the announcement that administrators had secured a $1 million donation — nearly a third of the money they hope to raise for the new space center project.

A bond will support the school’s reconstruction, but the district is asking for help to cover the $3.7 million new space center. It approached the Maryland-based Edward St. John Foundation, which revealed the $1 million check at the school assembly Monday. Daniel Thomas, a representative of the foundation, told youngsters in the school gymnasium to live lives “as big as the universe itself.”

Sandy Fugal, a Central 6th grader, was among those cheering the announcement.

“It’s really fun. It feels like you’re actually solving a problem in space,” Sandy said of the center. But she acknowledged that the missions can be stressful.

“We have to work as a team,” she said. “If we don’t communicate, we’re dead.” She believes the training will come in handy when she grows up and becomes a doctor.

Luis Rodriguez, also a 6th grader, feels similarly. He said math isn’t his strength but he likes to solve problems in the space mission scenarios.

“I think it’s going to be awesome,” he said of the new center.

It is expected to open in time for the start of school in 2020, equipped with an Evans & Sutherland system that will connect to a network of planetariums worldwide to share the latest renderings of planets and other content. Porter envisions showcasing footage that will be taken from NASA’s New Horizons spacecraft when it flies over Ultima Thule, an icy rock 4 billion miles from Earth, on Jan. 1.

The new planetarium will seat about 70, an improvement from the inflatable version the center now sets up in the gymnasium.

Since it opened in 1990, more than 400,000 students, including from Alpine School District and nearby charter schools, have passed through the center. Those who join the crews work together to dodge asteroids and communicate with interstellar leaders who at times reference Star Trek and rib their earthling counterparts. The simulators include a counterintelligence ship that can render itself undetectable.

“I think people are excited to know that we’re committed to not only rebuild the school, but to keep the space center going,” said Alpine Superintendent Samuel Jarman. “When business and public education come together, wonderful things can happen.”

Not just schoolchildren are welcome at the center. It also holds summer camps, birthday and bachelor parties, and team-building sessions for businesses.

On Monday, a member of Utah’s congressional delegation joined in the celebration. U.S. Rep. John Curtis told students at the assembly that science is “so important” and recalled that he was 9 years old when he watched television coverage of Neil Armstrong walking on the moon.

“I wish I had a million dollars to give you, but I work for the federal government, so we just take it,” the Republican representative quipped.

St. John Properties has built an office building in Pleasant Grove and is constructing another nearby. Its foundation arm has supported other projects in the city, including a renovation of the Pleasant Grove City Library, Thomas said.

Construction is expected to begin on the center in the new year, and donations can be made online at spacecenter.alpineschools.org/donate.